Drill writing is an art form that has been evolving for decades.  As developments in technology and resources reinvented the way society and band enthusiasts experience and approach the marching activity so too was drill rapidly influenced.

Did you know:  As late as the 1980’s corps and marching band would take the field and perform shows with just ONE yardline?  Just the 50 yard line and NO other marking on the field.  That might look like this:

You can see how drill execution from this era was best served by a system of guiding to the form and staying in line.  Watching videos (YouTube it!) from that era you will see slower velocities (until innovated by the Garfield Cadets) and longer curvy drill pictures.  Drill writing at this stage in the game was done by hand.  One neat innovation was a technique using a long small weighted rope and just kind of dropping it on the paper.  Whatever shape it took was how the students were told to line up!  Band of that era also marched around with timpani and were required to perform a ‘concert’ piece, usually a ballad, at a stand still so we can conclude that these gems are definitely antediluvian in nature.  (Bonus points for anyone who knows what that word means…and can tell me if I used it correctly! 😉

Today, in the laptop age, computer programs are most often used to write drill.  Pyware 3D Java is the most prevalent program out there.  Here is a picture of what the software looks like (THIS IS IMPORTANT): 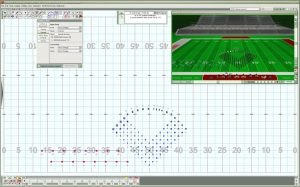 Notice the grid of the field, notice the clearly defined markings, notice all the consistent perpendicular and parallel lines available.  With this program every count of every move is diagramed by the computer.

And voila!  The computer will animate the motion from starting picture to finishing picture.  The writer clicks the “animate” button and then presses the spae bar 8 times to watch the digital dots move from counts 1-8 one count at a time.  This technological update is what revolutionized the learning and execution of drill.

Think like a computer for a second.  You are given two coordinates and are asked to move between them.  Get ready for some geometry! 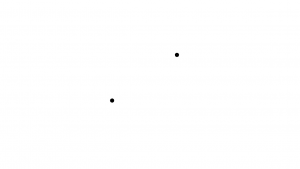 A line between them: 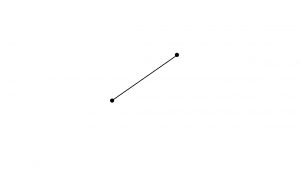 *notice this is a straight line, no curved paths.  Think like a geometric computer… 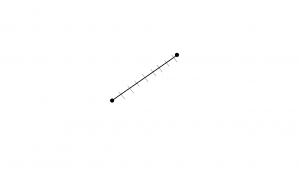 Each time the writer pushes the space bar the dots all progress 1/8th of the pathway.  This is why when the computer animates drill it is perfect.  As a performer, you must cover the distance between your dots in the same fashion.

To reiterate, the drill is designed such that each performer:

More proof!  Let me expand on this pont.  The drill charts look like this, starting dot and ending dot (forgive my sloppiness with Microsoft Paint) 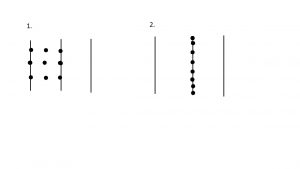 When you only do what most bands typically only do (hit their dots), you see only those two pages.  The starting page: clear straight lines and the ending page: one straight line.  The in-between counts are just a jumbled mess: 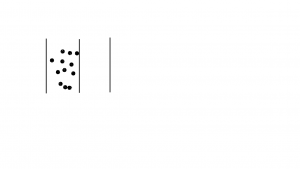 Now if we all executed the drill with computer like precision (the way it was designed) we would have this: 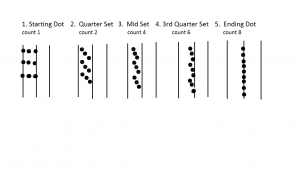 This is how we will have immaculate drill and really enhance our brain power.  Think about how that method of writing, seeing and conceptualizing drill could be used to make the band cleaner, smarter and more awesome.  More to come on that next!

No charge for re-writes due to personnel changes